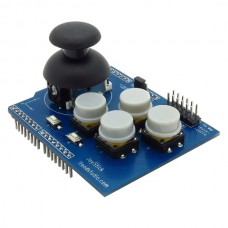 The Joystick Shield mounts onto an Arduino or compatible microcontroller to provide a joystick with push buttons.

The two-axis analog joystick features a classic video game action. There are four large round buttons and two small ones. The joystick itself can be pressed for a total of seven buttons.

This shield could be used to build a controller for your robot, game or other project. It would be a great UI User Interface for an Arduino based wireless remote control project.