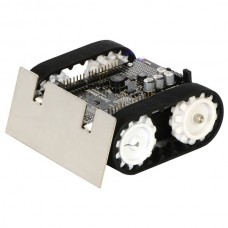 The Pololu Zumo Robot v1.2 for Arduino is a full featured robot body that attaches to your Arduino or compatible robot brain like a shield. At only 10cm x 10cm, it is small enough to compete at Mini Sumo and the included 75:1 HP motors, bulldozer-style blade and high traction tank-like silicone tracks will help you push forward and win.

This robot body includes a variety of features to help your robot perform well at a multitude of tasks. There is an array of six IR infrared reflectance sensors positioned for line following and edge detection. A 3-axis accelerometer and magnetometer allow the Zumo robot to detect impacts and can provide a rough indication of compass orientation. There is also a user push button to help control your robot.

An integrated DRV8835 dual motor driver provides plenty of current for the strong 75:1 HP metal gearbox motors. This little robot can go as fast as 2 feet per second yet has enough torque to push competitors out of the way. A piezo buzzer is also provided so that your robot can beep and play simple tunes. A 7.5V boost regulator provides power to the whole robot from 4 AA batteries. Regular alkaline and rechargeable NiMH batteries are supported. We always recommend using rechargeable batteries for your robot.

This robot body needs a brain. This robot works like an Arduino shield. You can attach any small form factor Arduino such as an Arduino Uno or Leonardo or a similar sized compatible such as an Iteaduino. Larger Arduino form factors such as the Arduino Mega or Due won't fit. Your Arduino or compatible is then used as the robots microcontroller brain. The Zumo Robot shield provides convenient access to the Arduino I/O lines, the pin 13 LED and the reset button. There are general purpose prototyping and expansion areas attaching additional sensors.

Please note that the Zumo Robot body requires a brain. You must provide your own Arduino or compatible microcontroller for the brain.