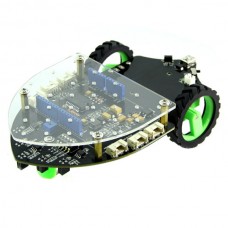 The Shield Bot attaches to an Arduino compatible microcontroller to create a beginner friendly robot.

Start building an Arduino based robot within minutes by using the plug and play Shield Bot robot platform. This Arduino shield attaches right onto your Arduino to create a complete robot with room for expansion.

This robot is powered by a 900 mAh Li-on rechargeable battery. The battery can be recharged from a mini USB charging port or the Arduino VIN power input source. A handy power switch will turn off the robot while allowing the battery to charge via USB. Several indicator LEDs are provided to assist with diagnostics. An Arduino library is available to simplify programming.