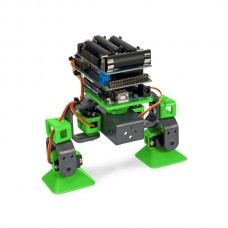 This kit attaches to your Arduino Uno or Mega compatible microcontroller to create a small servo driven robot. The two legged robot kit comes with a set of four servos, two Arduino shields and a collection of plastic parts for building the robot body. Everything is included to build the robot body. Just add your favorite Arduino Uno or Mega compatible microcontroller to give the robot some brains.

This kit includes a number of plastic parts and hardware for constructing the robot body. The legs are driven by four 9g analog servos. A set of two feet styles is included.

The completed robot can be programmed from the Arduino IDE using a downloadable library. Kids can enjoy programming the robot using the Scratch graphical programming blocks.

This kit requires basic nut and bolt assembly skills. No soldering is required. It requires an Arduino Uno or Mega compatible microcontroller and some batteries.