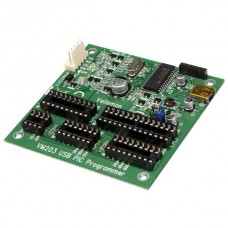 The programmer is fully PICKit 2 compatible for use with free Microchip tools such as the MPLAB IDE with compiler. It connects to your computer via a mini-USB connector. A standard ICSP In Circuit Serial Programming connector provides the ability to program your PIC microcontrollers without removing them from their circuitry. Three LEDs provide visual operating feedback.

The PIC Microcontroller programmer is powered from USB. The package includes a USB to mini-USB cable and a 5 pin ICSP programming cable.